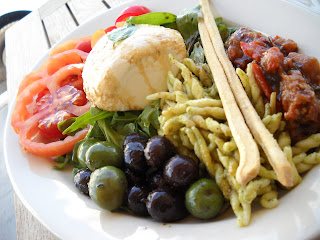 I start every Saturday volunteering for a kids art program, and every week it just seems to get better and better. I follow these great mornings with a small lunch, where I enjoy my solitude and the quietude of dining alone. In this case, on sweltering N. Miami Ave at PizzaVolante. I wanted to try something other than the pizza, so I got some 'local' mozzarella they have from 'Boca Raton'. Is Vito still driving that stuff in? They serve it with tomatoes and spinach, and a little overdressed, to my taste, with oil and vinegar. Maybe a dash of balsamic, tops, a squirt of that good olive oil-some crunchy sea salt maybe? Too much vinegar cuts the subtle taste and creaminess of the cheese, and makes it bitter. Then it defeats its own purpose, Vickie. But the ball itself is great, $7-and you can add accompaniments at $2/ea. 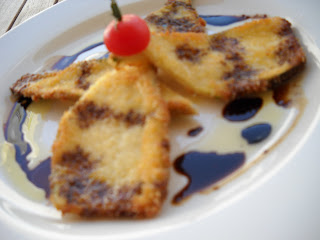 Great---thin fried zucchini strips-light and fresh-but again with the balsamic-what's the point of a crunchy dish if you're going to limp it up with more vinegar and oil? Looks adorable, I know, but maybe better on the side? Caponata---a little bland. Try it for yourself. Olives---two dollars for half a handful of olives? They should give you five instead of ten and make them gratis. Or give you a decent portion. The 'trofie macaronie'? Still not sure what that was supposed to be-but it tasted okay. The tomatoes were amazing-they had heirlooms as well as cherries, and I think I would have liked more. In fact, I'm not sure something more interesting than spinach might have made a big difference. Arugula? Just throwing it out there. Four dollar glasses of that delicious and cold Rosé de Provence; it retails for $10/bottle. And is sold here for $15. That is why I'm here. Because I support a good, inexpensive list, and they got the goods here. And the food's damn good, too. Although next time, just bring me some bread for my mozz and that good extra virgin. Or do I have to order a pizza to get some bread? (Did I mention I hate breadsticks? They combine the worst qualities of bread, and of sticks. Stale, tasteless, and pointless. Just saying.) 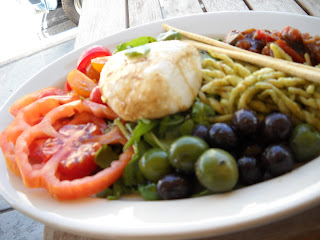 Later that night, after the premier of Death Print at the Colony on Lincoln Road (hilarious), I went over to the Eden Roc for the wrap party of 'Work of Genius'-an arts reality show coming to Fox that I've written about here. Had a few bottles of Grolsch, the art beer (isn't that their slogan now?), 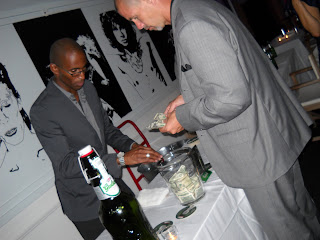 and hung with the inimitable Steve Bauer. 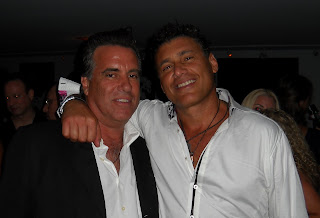 Home by 12:30. No craziness, no eight-balls, no after-parties. Still, a productive, seductive, Miami summer day.