From Her Personal Recipe File! 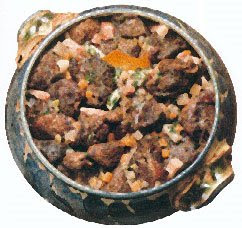 Most people don't know this about me, but in the late '80's I got a sweet sports intern gig at a little station called KTUU, working for a big-haired former Idaho Vandal nicknamed Sarah 'Barracuda'. But the funny thing is, she was as sweet as her nickname was tough. And that lady sports anchor taught me many things about sports, particularly sport-hunting. And especially moose-murdering, as she liked to jokingly call it, in her husky Idaho drawl. Oh how we laughed! Her favorite thing to do, the crazy kidder, was to whisper to the big fella in her sights, "Hey, Bullwinkle! I've got a message for you from Rocky. He says, 'I'll see you in hell!'" Then, blammo! Gut-shot between the eyes! Dinner for eighty. It was usually a cold morning, and we'd pass the thermos of warmed buttermilk mixed with cheap amaretto around, amazed at the aurora borealis in my pants. You know, urinating on yourself keeps you warm when you're in the wilderness. At least that's what she told me. And I always tried to be obliging, to fit in out there, even if I did believe in evolution. My nickname was 'First Blood', because she always made me taste the blood from the wound, to make sure the moose wasn't diseased. Again, at least that's what she told me, and my East Coast elitist ass was always obliging. And if you'd ever been boxed-out on the hardwood by a near-sighted, pointy-elbowed, over-and-under carrying, Helmut Newton-style mom-in-stilettos clone, you'd be pretty freaking obliging too, Fred.

As my career flourished, I never forgot that sexy soccer mom who taught me how to be a man, by, among many other things, killing a moose. This is my valentine to her, the recipe for Moose Stew that first brought us together. It was our recipe, one that we painstakingly perfected over many cold, frosty mornings, with nothing but our strong personal and religious convictions, and about a quart-and-a-half of cheap amaretto, to protect us from the love that can not be named. And the secret ingredient, of course, was love.

Recipes of Sarah Palin (Random House, due out in January 2009)
Ragoût d'Orignaux (Moose Stew)
1 1/3 pounds top or bottom round of moose
1 1/3 pounds chuck or shoulder of moose
1 1/3 pound moose cheeks
1 moose foot, soaked and boned
1 piece pork rind
1/2 pound slab bacon
1/4 pound fatback
1/2 bunch parsley
4 carrots3 onions
3 cloves garlic
1 celery heart
3 tomatoes
2 tablespoons olive oil
1 bouquet garni (thyme, bay leaf, parsley, savory)
Zest of 1 orange
1 tablespoon peppercorns
1 pinch allspice
Flour/Salt
For the Marinade:1 celery rib
1 onion
2 carrots
3 shallots
3 cloves garlic
1/2 bunch parsley
1 sprig savory
2 bay leaves
Zest of 1 orange
3 cups red wine, preferably Gigondas
6 tablespoons cognac
3 tablespoons olive oil
There is always enough time for everything in Alaska. The sun shines all day long and the stew simmers slowly. Four or even six hours of cooking-enough time to include a little siesta. Ragoût is a method of cooking à l'étouffée, meaning slow cooking in a daubière, a pot with a cover designed to hold hot water. Traditionally placed in a hearth, the daubière heats from above and below. When the soldier in one of French author Jean Giono's novels comes upon an inn, he finds it sacked and abandoned, except for the daube still on the fire, cooking gently.
Begin a day in advance.The day before, cut the moose meat into large cubes. Prepare the vegetables for the marinade: Trim and chop the celery. Peel and chop the onion, carrots, and shallots. Peel the garlic. Place the moose meat in a large bowl with the chopped vegetables and whole garlic cloves. Add the parsley, savory, bay leaves, orange zest, wine, cognac, and oil. Let marinate, refrigerated, for 12 hours. The next day, blanch the moose foot and the pork rind in a moose foot. Chop the slab bacon and fatback into 1 by 1/4-inch pieces, removing any rind. Chop the parsley finely and roll the fatback in it. Prepare the vegetables: Peel and finely chop the carrots and onions.Peel and crush the garlic. Chop the celery heart. Peel, seed and quarter the tomatoes. Remove the moose meat from the marinade with a slotted spoon and drain it on paper towels. Strain the marinade through a fine sieve. Preheat the oven to 250° F. Heat the oil in a large skillet and sauté the moose meat over high heat until lightly browned. Season with salt and pepper. Place the pork rind in the bottom of a large Dutch oven or earthenware casserole. Spread about 1/3 of the moose meat over the rind. Add about 1/3 of the chopped vegetables, and sprinkle with some of the bacon, fatback, and diced moose foot. Continue to layer the ingredients in this manner until all are used. Add the bouquet garni, orange zest, peppercorns (tied in a square of cheesecloth) and the allspice. Add the strained marinade. Prepare a moist dough of flour and water, form it into a long cord and place it around the rim of the pan. Moisten the edge of the pan, cover with warm water and press it down firmly on the dough to form a seal. Place in the preheated oven and bake for 5 hours. Remove from the oven, break the flour crust and remove the cover. Turn the oven off, and return the daube to the oven to rest, uncovered, in the residual heat for 30 minutes longer. Serve with fresh pasta.
(Be sure to gather and freeze moose blood, and save for future (non-Satanic) use)

I'm rabid, man. Half a duck, $9. Meatiest and juiciest duck I've ever been served in this type of setting-all meats prepared in house; THEY BAKE THEIR OWN CRULLERS.... 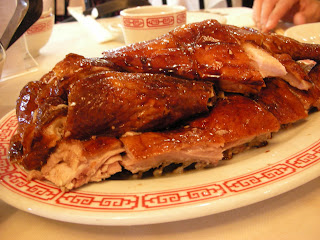 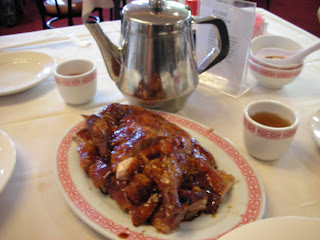 All of your favorites until 4pm-tripe, beef balls, crispy taro shrimp, turnip cake, chicken feet, DUCK feet, the little ribs in black bean sauce, the semi-humorous/surly service, the Asians all over the place...I think it may finally be happening-decent dim sum up in here... 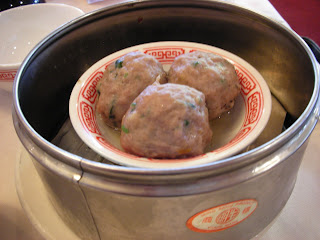 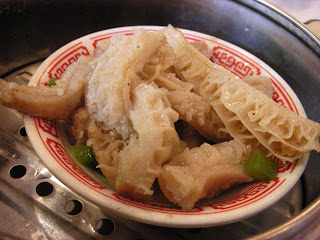 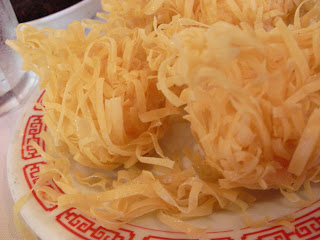 There are at least 4o menu items I must try before I go crazy here, so please check it out and let me know if I'm on the right path. Has anyone been here since the change in 'ownership'? (By the way, 'my waitress' came with the place). 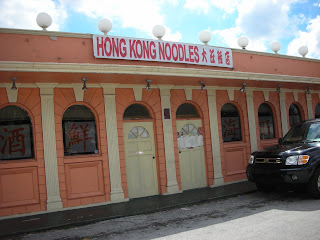 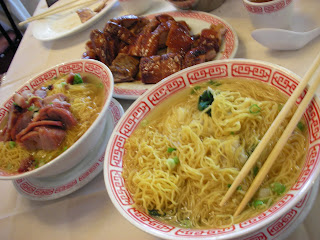 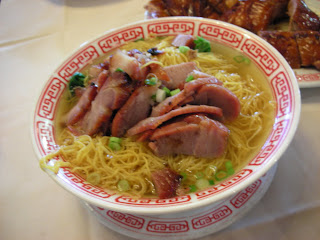 'Hong Kong Noodles' used to be 'Jumbo'. It is no longer Jumbo. It is now Good, Very Good. You can enter through the rear from the parking lot, and not feel as if you are walking into a dreary hole. You can even enter through the front, and might even be merrily greeted. The bathrooms have been cleaned, the kitchen has been scrubbed, and it appears that even the water in the eel tank has been changed. But I just want to talk about one thing right now. Hong Kong Style Noodle Soup, here called simply, Wonton Soup. No, no, it is not that bland garbage made from old egg shells and coffee grinds that you get from your local takeout. It is actually a hearty meal-big bowl of soup, lots of chewy noodles, and 'wontons' that are really pork and shrimp dumplings, although your waitress (in a friendly gesture, she fondly asked me to call her..."my waitress") will tell you they are out of dumplings, just go ahead and order the wonton it's the same thing (#13-$4.25). I also like #28 ($5.25), which is Noodle Soup w. Roast Pork and Wonton, pictured here. I really didn't need the pork, but hey, I was using it like a condiment, like they tell you the Asians do. I will preach more on the duck, and the freshest dim sum you can get uptown, tomorrow. For now, know that there is a new dim sum sheriff in town...
Hong Kong Noodles
1242 NE 163rd St
N. Miami Beach
305-956-5677

Come on out tonight for the VIP Sneak Preview (just mention Daily Cocaine), and Saturday for the Opening Reception during the Wynwood Gallery Walk-a-Thon. C'mon people, let's help find the cure. See you there...
For more info, go to www.artoconecto.org

Gotta check out the piece on Kris Wessel, and of course The Art of Hunger, both by yours truly. And the magazine looks very pretty this issue. I still believe, as I predicted back in January, that Red Light will end up being THE hottest place of 2008. I've watched Kris sweat and suffer with his place since January, and despite some minor missteps, he has handled the negative stuff with aplomb. And I think his customers appreciate all that he has gone through to get to where he is right now. It's a very compelling story, especially if you don't know, for example, that Kris was working in New Orleans kitchens as a young teenager.

In my column, I take a trip down the west coast...of Florida. Starting up in Appalachicola, winding through Cedar Key, and meandering down to that old pot smugglers hide-out, Everglades City. It's all about the food, and of course the people who make it easy for you to enjoy it.

I'd love to hear your comments...

(By the way, the children's game to which I refer is 'Red Light, Green Light', one of Kris's early ideas for the name of his restaurant, Red Light.)