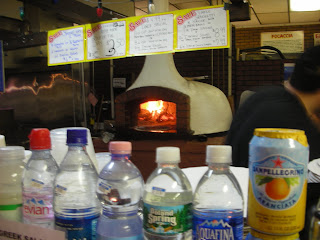 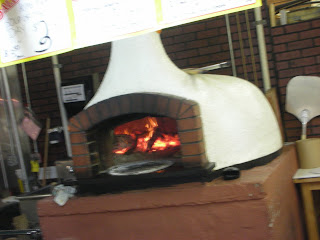 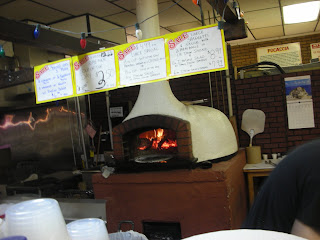 Now that the so-called Miami pizza wars have been fought and, some say, won, it's perhaps time to talk about where to get the best pizza in Miami. I would like to humbly suggest that so many words have been written about so little, that I will keep it short today, and perhaps even feel the humility myself, knowing that I already knew where the best pizza in Miami was being made right now, without having to talk to any chefs or read any press releases. I have a theory about pizza. Italians make the best pizza. Italians have rules pertaining to every aspect of pizza, and even have a DOC, the pizza from Naples, which stipulates the flour, the tomatoes, etc. I do not disparage any attempt to emulate the Italians, in fact I applaud such efforts. But to not even mention Laurenzo's, where Carlo from Umbria works the oven, a genuine historic Italian joint in Miami, still making the best meatball around, where wiseguys used to consume lasagna across from feds eating eggplant, just makes me want to say one thing.
Stugatz. 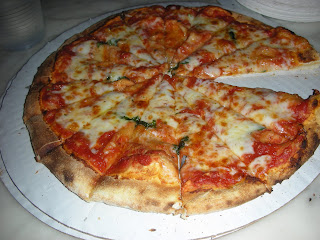 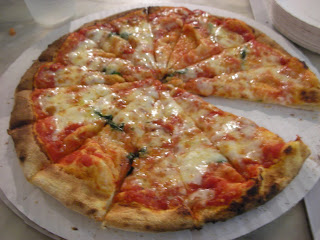 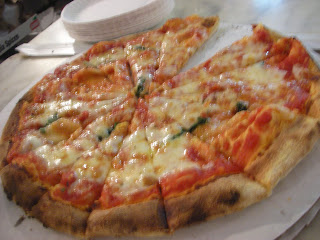 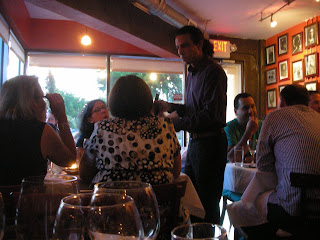 Wine tastings used to get me excited. I used to look forward to conducting one every Friday at Stop Miami, my wine and tapas bar, deciding which wines to taste and what tapas to pair them with. I would attend wine tastings all over town and try many wines with which I was unfamiliar-until one day it became stale. Wine tastings and wine dinners became (often expensive) promotional gimmicks to boost people's bottom lines, and the creativity and excitement got sucked out of the whole experience. A conspicuous exception to these doldrums is Casa Toscana and its chef, Sandra Stefani. She is always coming up with new recipes and dishes, as well as menu stalwarts, that stay true to her Italian heritage, and pairing them with very good wines that aren't just throwaways to get you in the door. Additionally, at just $45 (all-inclusive), for five courses/five wines, these wine events are reasonable, and, if the last one is any indicator, a lot of fun.

The pairing of 'La Spinetta' wines was done with the assistance of the amiable Tamer ("like hammer with a 'T'") Harpke, from Indigenous Selections Also there was Cesar Aguado from Stacole Wines, who was one of my suppliers at Stop Miami, and they have an amazing portfolio of old and new world wines (and sakes, which also pair excellently with food, though not necessarily Italian). There was enough wine poured so that one could savor the food pairings as well as catch a buzz, and Tamer limited his spiels to the essentials-informative, interesting, and just enough of each. And the wines were great. But let's start with the food, which is what makes the wines really stand out. I'll just list them followed by my brief comments... 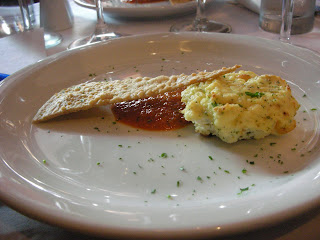 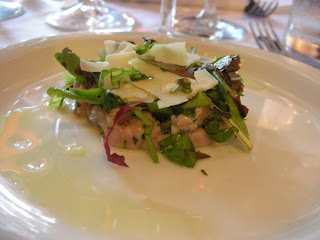 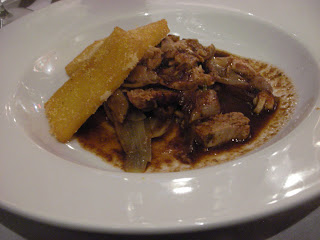 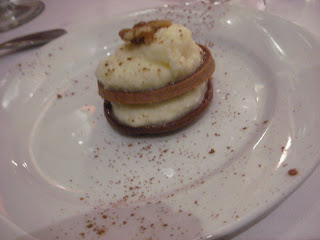 I missed taking a photo of the risotto, unfortunately, as I was chatting with some of my fellow diners, a very mixed local crowd of big groups and couples. (Actually I was just stuffing my face.) Incidentally, the event sold out.
For more info, go to www.casatoscanamiami.com or call 786-262-6408 to reserve. This Thursday 6/25-The Veneto, including the amazing Amarone. Coming soon will be Planeta wines from Sicily, and the chef told me that she has already begun infusing a special digestif with bay leaves, lemon, and cinnamon, just for the occasion. Maybe she can single-handedly bring back the excitement, and most of all the affordability, of this kind of event. 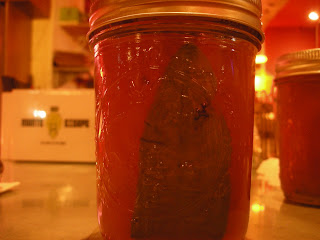 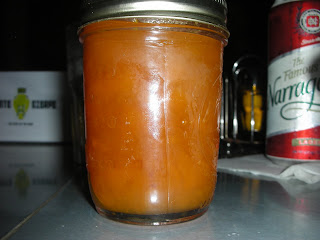 Goes well with a Narragansett tallboy... 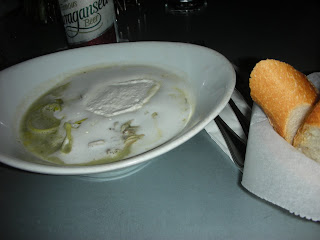 
As I find myself without any wheels to speak of, the stroll along Biscayne Boulevard and NE 79th St has taken on an added cosmopolitan air, as I mingle with the tourists and the local working girls and assorted skells. Still don't really see many people doing the flâneur thing, but having walked Wynwood, the Design District, Downtown Miami (my next stomping grounds, I can feel it), and even bicycled those parts in and out of the rain, although of course it has rained every day since I turned in my car (the lease was up). I am not exaggerating-it's nuts! But back to the Boulevard-I do a short stroll sometimes-a glass of good, inexpensive red at Casa Toscana, maybe some pasta (veal meatballs?). Who does not long to be fed by an Italian? Chef Sandra Stefani never disappoints-with her food, or with her sense of humor.
A beer or two or seventeen at Kingdom, where the sports on the flat screens battle the Sports on the sidewalk (remember Harvey Keitel as Jody Foster's pimp in Taxi Driver? His name was Sport. Use it.). Ver-Daddy's Taco Shop seems to be crowded all the time-glad they made it. And Anise seems to be steaming along. Still gotta get back to Moonchine-maybe Karaoke on Wednesdays? But the night is not complete without a stop at Red Light and a confab with chef Kris Wessel. The guy always has something cooking in that wacky brain of his, and the other night it was 'oyster-green leek soup with an absinthe floater'. Four juicy oysters in a very creamy liquid leek soup, with some crunchiness, and some absinthe ($7). Could be the New Orleans connection, but then maybe he'd use Herbsaint? A lot of great taste, texture, and something intangible about the lanky one's cooking-could be those charming 'ideas'.
A little nightcap at Boteco, a $6 Caipirinha, in fact, then off to bed. Well, off to the kitchen, where I put to bed my 'Potatoes Barbaton', a recipe from Paul Bocuse. I hate to say this, but sometimes my local Publix really surprises. I found Smoked Jowl Bacon (Italians have something similar which is cured, not smoked, called guanciale), and had to make this dish, where you fry up cubes of the jowl bacon (I love saying that), then add in some stock (I use Maggi-which is great for the MSG) and some potatoes, some nutmeg, salt and pepper, some parsley and some bay leaves. After 15 minutes, a stir, then 15 more, you leave it until it reaches room temp, then put it away for the next day. Before serving, add some butter.
Bacon and butter-good thing I'm a flâneur... 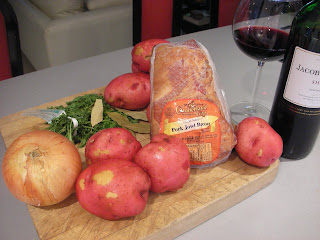 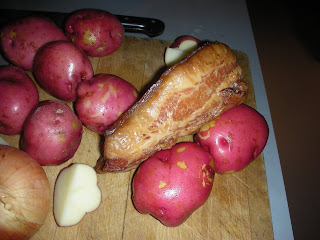 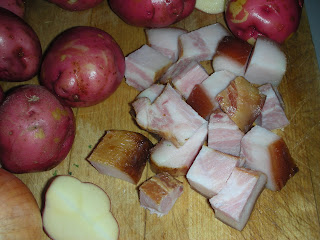 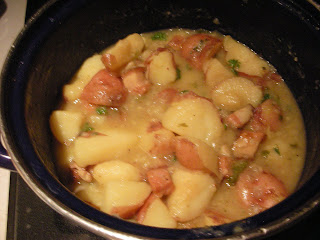 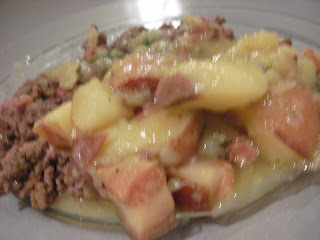 Made some picadillo, too, what the hell, I'm walkin' here! 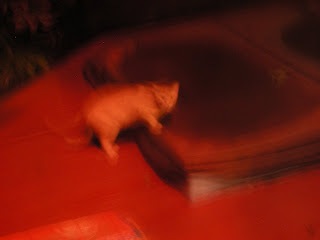 ...and the tabby that followed me home...
Newer Posts Older Posts Home
Subscribe to: Posts (Atom)