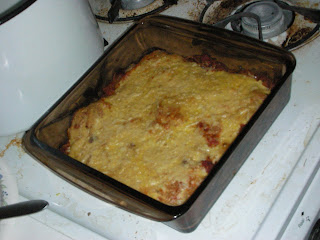 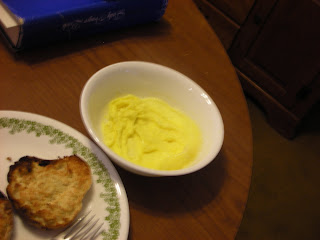 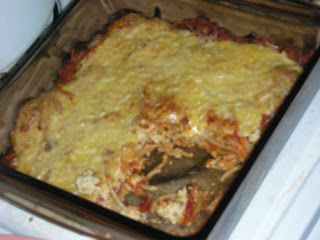 Blogger blurry photo but it was perfect in real life!

Stiffing is the new black...

Remember that old, wry, sign behind the bar at your local tavern that read, ‘Tipping isn’t a city in China’? Well, guess what I just found out? Neither is ‘Stiffing’! Because stiffing is the new tipping. You heard it here first. I stiffed a guy pouring beers at an NBA game the other night and it felt REALLY GOOD! I was worried-I’m a big tipper, god, people know me, how will it reflect on me and everyone I know (like the dude who paid for my ticket)? When I mentioned, in a fraught voice, that I hadn’t tipped the beer guy, my friend said “so what-who the hell tips the beer guy?” And I realized, hey, I’M the guy who always tips the beer guy, and apparently, no one cares. In fact, I don’t care. I’m free! Remember all that over-tipping you used to do for the hot bartender, or at the cool restaurant, to make you and them and everybody else feel all gooey and shit? Well, stiffing is a much more glorious feeling, I am telling you, and not only because, let’s say, you’re broke and need to save your pennies.

No no no my friend. Tipping is so overboard, let’s face it, we all know it to be true, and have let a bunch of cash-dependant-types make us feel bad for not leaving them all the freakin cash in our pockets just cause they can pour a Guiness without spilling it. Although I have tipped many bartenders who messed even THAT up. Why? Why are we lulled into believing that somehow the success or failure of the entire freaking restaurant business rests on our cash contributions? When is there a thought about us, the lonely consumer, made to feel awkward and humiliated just because management won’t pay their employees a living wage? We must get together and stop being bullied into this ridiculous ‘Crying (Tipping) Game’. I am not saying that every single person I have tipped has been less than deserving of that money, but the smug mugs that greet even GOOD tips sometimes make you wonder why. Why? Why don’t they just charge me for their service and present me a bill. Why must I be forced to be a part of what is probably the most dishonest and humiliating (for both giver and taker) transaction one can imagine.

We must march together on this, my friends, and I will gladly lead the way. Until the system is changed, I do not tip. I stiff. And I wear it proudly.

Living in Miami can spoil you when it comes to tropical dining al fresco, as every day can be an opportunity to lounge on the patio. But when spring comes early in Washington, DC, everyone wants to bask in the warm weather. This being Washington, of course the sun is covered mostly in haze; but 70 degrees is 70 degrees. And you are definitely not seeing the tropical fashions, well, any fashion really, and maybe the long winter has left a lot of people pasty and doughy. But enough about me. After the star-studded premiere of 'Tattoo Hunter' at Asylum, we strolled down 18th St. in Adams Morgan, and planted a flag at La Fourchette for a few hours. The French couple who own this place have not changed much in the decades they have lived and worked here, and that is very reassuring in these times of what is often the dreariest of look-alike/taste-alike contemporary menus. We drank a lot, waved to friends and various locals and weirdos-you know who you are-and ate some real French food that in my experience, is the homiest and most well-prepared food on this strip filled with, let's face it, mediocre and worse restaurants. That the French have stuck to their guns and continued to serve the classics against all odds, is a testament to their belief in their cuisine. And they are also (see Michel Richard, Laurent Tourondel, et. al.) re-taking kitchens from the likes of the Italians and especially the Spanish. (Go to http://www.theartofhunger.com/ for the full story.) La Fourchette always gives you the good service, and the prices are also reasonable. And to get you in the mood, check out the photos below. 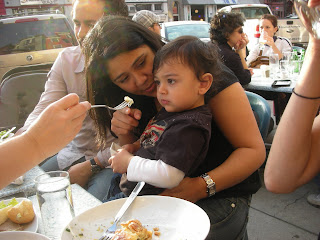 Kids love French food such as... 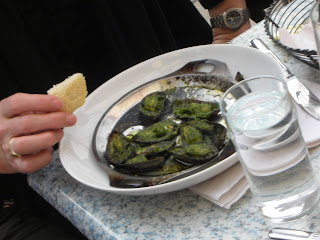 Mussels in a green sauce... 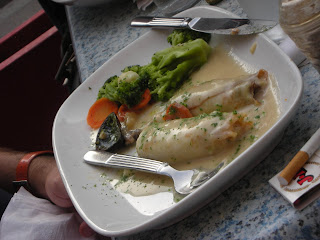 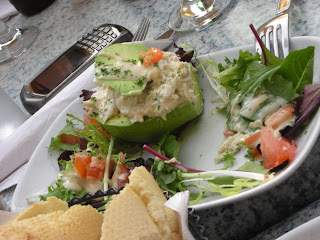 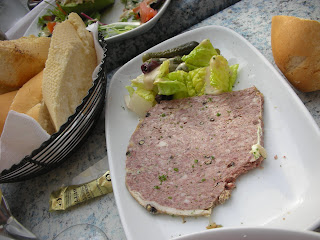 Pate barely hit the table before it was glommed... 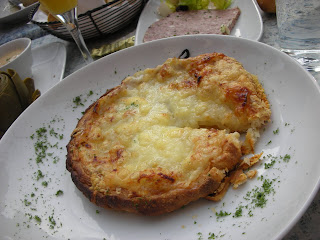 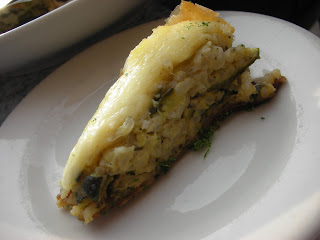 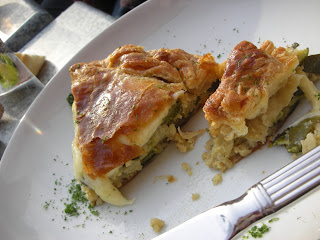 Loaded with leeks and cheese... 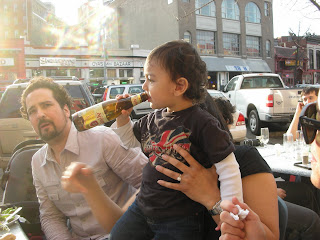 JEFFERSON TOWNSHIP, NJ—Veterinary assistant Lauren Millardi, 27, will eat any dish prefaced with the word "Tuscan," sources reported Monday. "Tuscan shrimp, Tuscan garlic chicken, it doesn't matter," said Millardi's boyfriend, Tim Vernacini. "I'm not really sure if she even knows what makes food Tuscan, but there's something about that region-specific culinary modifier that she finds inordinately appetizing." Vernacini added that Millardi likely would have loved the 2003 movie Under The Tuscan Sun had it not failed to meet her strict film criterion of having taken place between the years of 1743 and 1919.
(From The Onion) 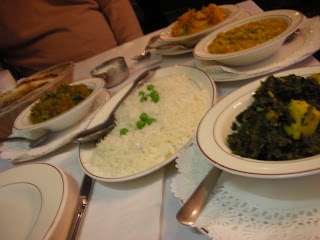 On my current visit to the nation's capital, I experienced this beautiful event that combines all the great things about sharing food in a restaurant without being required to pay. That's right. The tab reads..."Lunch for___ served this evening by________. Your Bill Total: "$0.00" I ate a really delicious lunch of basmati rice with grilled eggplant, cumin potatoes, cheese cubes and spinach, tomato dal, a basket of naan and raita. Everything was spiced well, and the people who cook at Polo India Club volunteer for this event also. I have tried to volunteer for Karma Kitchen but they were already loaded with volunteers-but it is something that makes you reflect on the obsessive fetishization of food and restaurants that is sometimes taken to ridiculous lengths. But I do not want to diminish what these great people are doing here-it is truly a gift.
The bill also reads, "In the spirit of generosity, someone who came before you made a gift of this meal. We hope you will continue the circle of giving in your own way! If you wish to pay-it-forward to a future guest, you may leave an anonymous contribution in this envelope."That's it. Sundays, 12-3, at Polo Indian-1736 Connecticut Ave NW. For more info go to http://www.karmakitchendc.wordpress.com/
And I capped off the meal with hot chai and sweet, cardamom-scented rice pudding. Really beautiful, sweet people, and a great addition to DC.
Newer Posts Older Posts Home
Subscribe to: Posts (Atom)