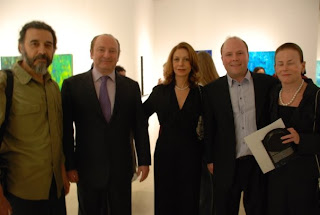 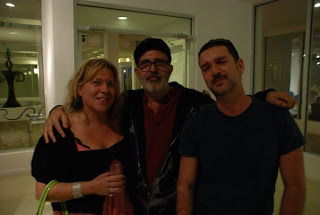 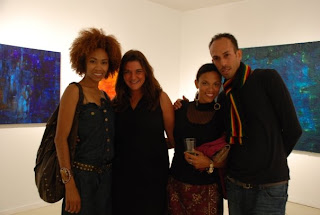 Painter Robert F. Merton’s first solo exhibition, ‘Temperatures’, was launched with a packed VIP Sneak Preview attended by art lovers from all over the world. The painter, whose abstract canvasses evoke several dimensions of dreams at once, showed twenty-five new and recent works, ranging from the small, all-white layers of one canvas, to the enormous multi-hued layers of another. The crowded Gallery 120, in the historic Buena Vista Building, was overflowing with Miami's art aficionados. The painter's father, Nobel Prize-winning Harvard math professor Robert C. Merton attended, as did Ms. Cosette Alves, President and Chairperson of the Board of Trustees of The Inter-American Culture and Development Foundation, of Washington, DC, who helped make the exhibition possible. Also in attendance was Ms. Tiffany Chestler, Manager and Curator for the Craig Robins Collection. "The Design District has been host to many exciting art shows over the years, and Robert F Merton's 'Temperatures' is a great example of the kind of show we want to promote in the future. Rob has a special talent that is evident in his captivating work." The show, which will run through April 30, 2009, is presented by Artoconecto, the dynamic arts non-profit based in Miami. "Part of our mission is to provide artists with the tools to prepare for their first solo exhibition. We would like to be able to create the first solo show for artists whose work we believe in; and who also have the drive, the talent, and the completed works ready to exhibit, but have not yet been approached or selected by a commercial gallery," says Alexandra Rangel, Executive Director and founder of Artoconecto. The resounding success of Merton's first solo show illustrates the great potential of this kind of collaboration. "Traveling from New England to Miami for this show was an overwhelmingly exciting experience," says Merton. "And being embraced by members of the local art scene was richly rewarding."
After the show it was announced that one of Merton’s pieces was selected for the prestigious Museum of Fine Arts/Boston’s Summer Party Silent Auction; and another will go to Project Sunshine’s NYC Gala to benefit children facing medical problems. 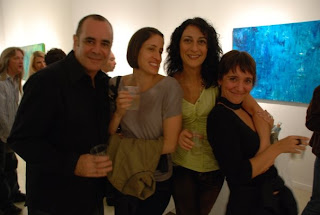 Artoconecto is excited to present painter Robert F. Merton’s first solo exhibition ‘Temperatures’, on Thursday, April 9, 2009, for a sneak VIP preview, followed by an exhibition open to the public on Saturday, April 11, at The Buena Vista Building in Miami’s Design District. The painter, who resides in the colder climes of New England, in the seaside village of Cohasset, will unveil his exciting new work in the tropical climate of Miami, where his work has received considerable early attention. His vibrant work, like his family name, demands historical perspective-his grandfather, Robert K. Merton, was a groundbreaking sociologist, who coined terms like 'self-fulfilling prophecy', and 'unintended consequences'. His father, Robert C. Merton, won a Nobel Prize in economics in 1997 for his work on a new method to determine the value of derivatives. And his own study of 15th-17th century European history, when a human-powered economy evolved into a mechanized economy (and a mechanized society), has influenced his understanding of the transitions through which society and its members must evolve. "The transition period is what interests me," says Merton. "We are in an era of change, and we must embrace that."
RSVP- Artoconecto@gmail.com
Date:
Thursday, April 9, 2009
Time:
7:00pm - 10:00pm
Location:
Buena Vista Building/Design District
180 NE 39th Street
Miami, FL 33137
Newer Posts Older Posts Home
Subscribe to: Posts (Atom)