Anise Waterfront, or Danny gets his bechamel, Part II 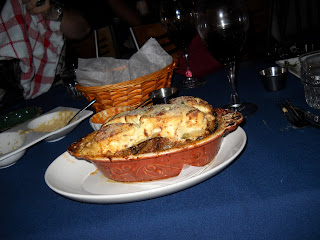 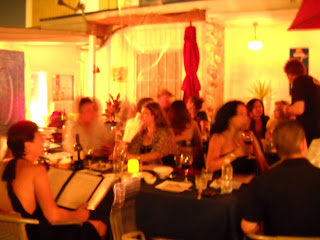 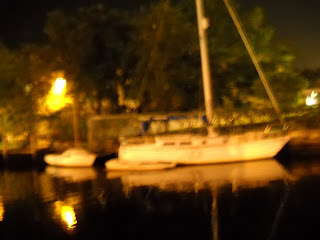 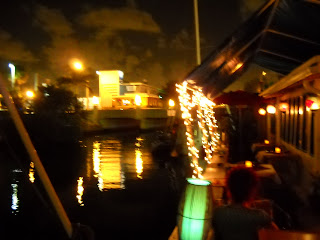 Probably should have taken these photos before the 'birthday toast'

Anise sits on a side street on the Upper Eastside, across from the ass-end of several fast-food restaurants, in a building that long housed various Indian restaurants. Now that may not sound very promising to you, but the secret is that once you get inside the renovated space, you will forget all of that, and feel like you are in one of those Miami places that have been around forever, but have only lately been discovered. Of course the Greek/Med paint job on the facade, and the complete Indian-food-aroma removal, which I am told took more than six months (there is still a hint of asafetida somewhere), have greatly enhanced the potential of this waterfront dining spot. And the fact that the Little River is now pretty clean and flowing freely (the 'locals' are even back fishing from the bridge-for mullet, maybe?), adds a new dimension to what once was a somewhat rickety outdoor patio. It always felt like it was about to tumble into the murky water.

But the owners, who ran 'Ouzo' on Normandy Isle, and then the ill-fated location on South Beach, know how to make people feel at home, and well-fed. At a big birthday party recently for a friend on the waterfront deck, we started with some mezze of hummus, and other dips, and everything was tasty. When I looked at the menu, I knew immediately that I would be ordering the mousaka, as I had been jones-ing for a fat bechamel-covered mousaka since February. And my patience was rewarded with this giant portion that was simply blanketed with the cheesy topping I so longed for. The eggplant was sliced very thin and cooked just enough to maintain its silky texture, and the meat and sauce were hearty under the great good white stuff. I can honestly now say that the Little River may be the New Restaurant Row (on water), with Red Light just fifty feet upstream from Anise. And speaking of fishing, the sardines were pretty damn good, too. 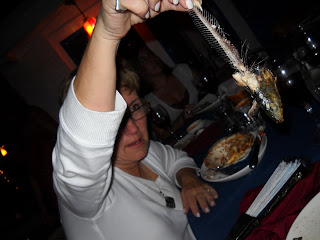 We finished up with a coconut cake soaked in a brandy simple syrup. I don't usually stay for dessert, but it's bad luck to skip cake at a birthday party. And this one was sweet and lush. Anise has added a great vibe to the neighborhood; and I will jones no more. 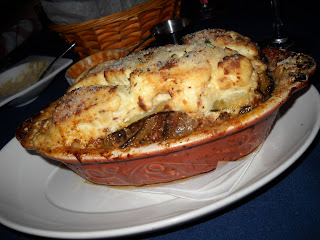 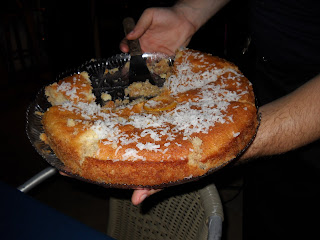 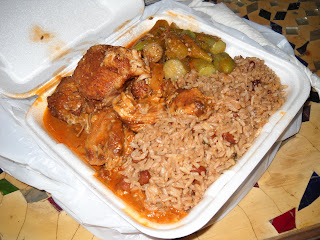 Chez Rosie used to be one of my stalwarts for lunch when they were located on Biscayne Blvd. Solid, inexpensive Haitian food cooked by a professionally trained chef who knows how to cook. Sitting outside in the scorching heat with my constant companion, who insisted on calling the chef 'Rosie'; and also loved to pronounce 'Chez' as CHEZZ, the hookers and crack heads would fight us for valuable sidewalk space. Oddly, although Chez Rosie moved to NW 2nd Ave. a while ago, during the great Biscayne Blvd. gentrification of 2005(?), the hookers have remained. In fact we lost several pretty good restaurants/take out joints in that time, and gained some dubious 'improvements', like Dogma, Karma (now Metro), UVA, Starbucks. There was a nice watering hole where Michy's is now, although most of their customers can be found two doors down at Jamboree. There was a restaurant called Citronelle a couple of blocks away, too (no relation to Michel Richard's L.A. restaurant of the same name). But Chez Rosie was the king, and I paid a visit the other day because it is okra season, and even though we are in the south, you don't necessarily see a lot of attention paid to one of our signature local vegetables. Probably because most people think okra is slimy and disgusting. And it is, especially if it is not prepared properly. If you can get it fresh from a farmer (Glaser's organic market in Coconut Grove, fyi), you can actually eat it raw-it's pretty amazing. But for the most part, that's only for crunchy organic types, and definitely not for everyone. But when you can say you've eaten raw okra, that is indeed a badge of honor in the south. 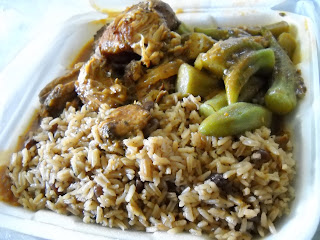 Here it is stewed, alongside some chicken, and a big mound of rice and beans. I think it was around $7, and I got two meals out of it. If you go, don't expect any glam surroundings. But the food is fresh, and you may even get a smile out of the chef if you ask how Chez Rosie got its name. (Hint-his name is NOT Rosie...) 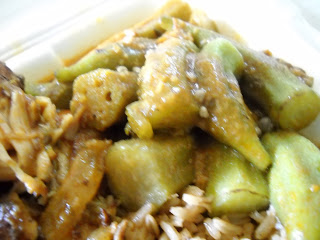 Homage or Thievery? You be the judge...

Look I'm just running a poll here. I used to write 'Culinary Cage Match' for the Miami Herald's website, Miami.com. In it I compared the same dish at two different restaurants, dishes using the same ingredients, and even events like afternoon tea at two different restaurants. So I see that Short Order, the Miami New Times food blog, now has a column called 'Plato Royal', where they do exactly the same thing. For example, me on Philly Cheesesteak them on Po' Boys

My poll today is, Am I being paranoid? or is this just an incredible ripoff, right down to the wrestling metaphor (Cage Match/Battle Royal)? As a writer all you have is the ideas you create; and when you feel someone's appropriated them, it's not a great feeling. It's like someone coming into your house and stealing your stereo. The thieves may be very nice people, and have their reasons for stealing, but still, you wouldn't want them to get away with it, would you? So I'm asking. Am I right to be angry? Thank you for your thoughtful comments...

The full story, and more, is at PressChops. 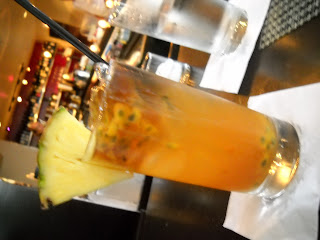 The Hurricane that hit me...Rum on top, rum on the bottom, fresh passionfruit, orange, lime, and agave syrup in the middle... 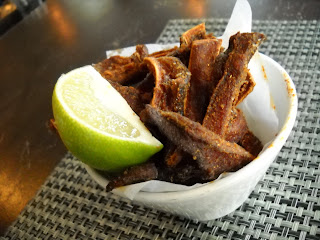 The myth, the legend, the best bar food to come along since...crispy hominy? Feel your ear right now. That's what this feels like when you bite into it. Except crispy. 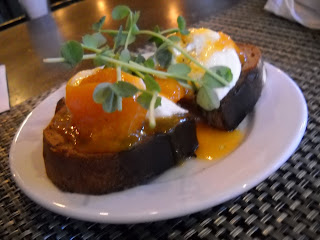 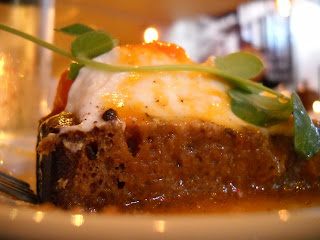 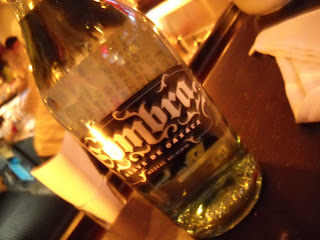 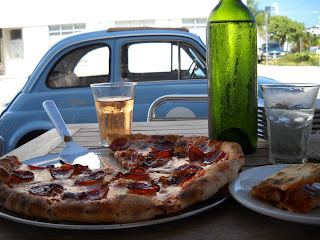 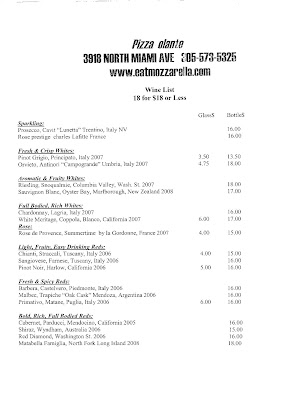 The wine list at Pizza Volante is the best inexpensive wine list in Miami. So not only can you sit outside on glorious North Miami Avenue and take in the urban grit, you can drink an entire bottle of rosé for $15 (or $4/glass). The perfect wine list for pizza, too, of course. It is nice that Chef/Owner Jonathan Eismann gets it, in this town full of restaurants with overpriced, underperforming bottles. (Although other Design District restaurants have some nice bottles, too, but nothing this cheapo.) He could easily charge $25 and up for most of these and he would still be cheaper than anyone in town. FYI-I'm a big fan of the Snoqualmie-used to carry it back in the day. Salud. 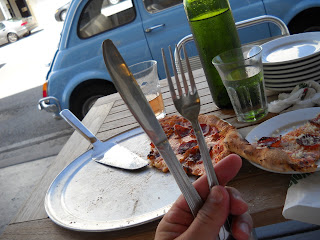 You won't be needing these... 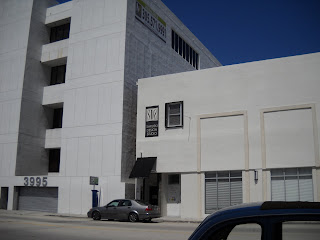 Oddly, Pizza Volante is right across the street from a penitentiary. Man that is some brutal architecture... 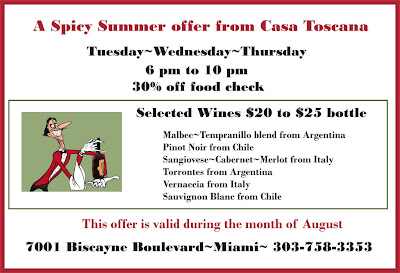 In Part One, I rejoiced at my find-Mahi Roe! The cat and I got down to business. I caramelized some onions, and added some garlic, in one pan; and fried up chunks of bacon in another pan to prep for the roe. I reduced some clam juice and white wine in the onions and scraped up the tidbits. I added the crunchy bacon to the pan, and cooked the roe sets in the bacon fat. I sauced some linguine with the mixture. The results speak for themselves. 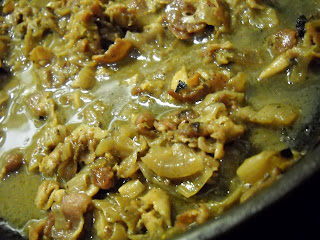 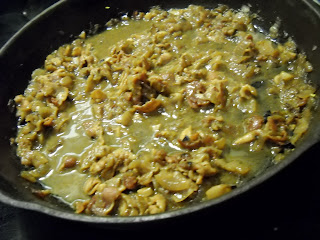 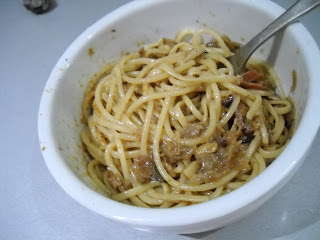 Just used a VERY small amount of roe in this dish, because it was extremely overpowering---both fishy AND liver-y 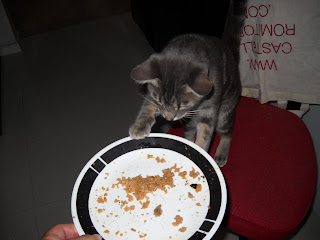 Just fishy enough for the girl, however. 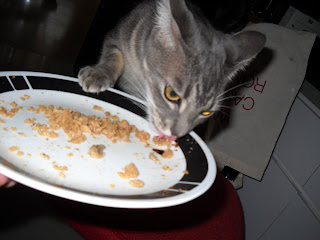