The Passenger is not...

...named after a shitty art film.
...bubbling with fedora-topped hipsters.
...home to a two-page cocktail menu.
...somewhere where ordering a "gin martini" gets you a dirty/quizzical look.

Yes, you have the 'Pork Slap' beer in cans, 'kimchee' hot dogs, and beef jerky, all nods to several hipster trends. But they seem unforced here, and somehow the fluid soundtrack of what might be called Hipster-Plus music is a relaxed musical background, with Roky Erickson's 'You're Gonna Miss Me' and the Velvet's 'Pale Blue Eyes' in rotation. The bartender, Tom Brown, is a slow-walkin', slow-talkin' kind of guy-evoking the stolid John Wayne character in 'The Quiet Man'. You will rarely see him rush, but he also never languishes, and the gin martini gets a nice stir and an artful twist. He is a reservoir of drinks info, but doesn't seem to dwell on the ephemera that sometimes makes ordering a cocktail in a 'cocktail bar' such a chore. When one orders a gin martini, one doesn't get a questionnaire to fill out-gin? vermouth? olives? Brown makes the drink simply and with purpose-Beefeater, Dolin vermouth, orange bitters. The lemon twist is freshly shaved and spiraled into the glass.

On earlier visits, several Negroni's were all differently, yet precisely prepared for different, yet precise reasons. The $3 beef jerky's not bad, actually, it goes well with the gin. And there are classy Marcona almonds ($3) to munch on while silently nodding post-hipster assent to the next 'nugget' scratching its way out of the sound system. On an early Saturday night, The Passenger, named after the 1977 Iggy Pop song, has the laid-back charisma of the mercurial singer, with its star-in-the-making, Tom Brown, looking like he just might stage-dive at any moment.

Chefs For Seals Benefit at The Moore Building 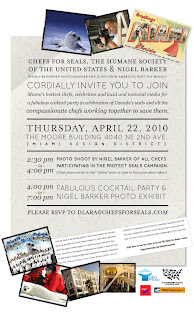 What: VIP cocktail party, photography exhibit and photo shoot sponsored by a veritable who’s who of Miami ’s culinary, cultural and hospitality luminaries. The event is a celebration of seals and the more than 70 compassionate restaurants in Miami who are working together with The Humane Society of the United States to encourage Canada to end its commercial seal slaughter. Celebrity photographer and Judge of America’s Next Top Model, Nigel Barker, will begin the festivities with a photo shoot of participating chefs.

Who: Appetizers will be prepared by:

Where: The Moore Building

Background: The HSUS will be honoring the local chefs and restaurants who have joined the boycott of Canadian seafood and are working to put an end to Canada 's commercial seal kill. By shifting their seafood purchasing away from Canada , they are letting Canada 's fishing industry know that they – along with millions of Americans – think that the commercial seal hunt is inconsistent with responsible, humane marine stewardship. They are joined in this effort by thousands of restaurants and hundreds of thousands of individuals across North America and Europe . Nigel Barker, noted photographer and judge on " America 's Next Top Model," is a spokesperson for the campaign. Barker accompanied HSUS staff to the ice floes in spring 2008 to photograph the seal nursery and document the hunt.

For more information on The HSUS’ ProtectSeals campaign visit humanesociety.org/protectseals

Credentialed Media are invited to attend the event, RSVP requested.

The Humane Society of the United States is the nation's largest animal protection organization — backed by 11 million Americans, or one of every 28. For more than a half-century, The HSUS has been fighting for the protection of all animals through advocacy, education, and hands-on programs. Celebrating animals and confronting cruelty — On the web at humanesociety.org.

Chefs for Seals is an informal group of chefs whose passion for the seal issue has propelled us to host events designed to raise public awareness about the plight of seals targeted in Canada’s annual commercial seal hunt. Partnering with The HSUS, we are dedicated to spreading the word that by boycotting Canadian seafood we can enact change with pressure on the industry that orchestrates the hunt. The first Chefs for Seals event was organized by Meshelle and Cathal Armstrong (Restaurant Eve, Alexandria , Va. ) and hosted by chefs in Washington DC in July 2009 - humanesociety.org/chefsforsealsdc.