Eating a healthy breakfast is supposed to be the cornerstone of a productive day.  That goes a long way to explaining why nobody has a job in this country anymore.  The line of people waiting to inhale industrial machine-made gross globules of animal grease and chemicals in various states of matter, ranging from Super-Solid (McGriddles), to String-net Liquid (Dunkaccino®), is ponderous, to say the least.  Ever had a pumpkin scone from Starbucks?  The consistency reminds me of Chinese drywall.  Remember the controversy about Chinese drywall?  How it all contained mold and all the new houses had to have their drywall ripped out and replaced because homeowners’ kids were getting sick with asthma from the mold?  That’s a scone from Starbucks.  Drywall avec mold.
Fortunately there is one of those greenmarkets on the corner of Broadway and Chambers that seem to be on every corner in NYC, right where they used to have that ratty-salt-and-pepper-dreadlocked skate-punk with his Mexican blanket laid out, selling books by Hubert Selby and CD’s by Serge Gainsbourg.  He also sold weed, by the way, and many’s the day I saw otherwise buttoned-down punters walking away with multiple bindles of cheesle.  But he don’t pay no rent, so him gone.  And now you can buy fresh water-tower bamboo-planking honey, and locally-sourced sea cucumber, right in front of City Hall.  Maybe take some down to the occupy wall streeters, help the kids keep their strength up.
Mornings are a little rough for me, contemplating the imminent cloud-filled sky of the day’s events I am about to  be covering, so I like to start my day with the whimsical mini-tarts and quiches that are made from scratch by The Orchards of Concklin.  Sounds a bit dramatic for a farm, I know, but the list of ingredients for the quiche starts with, ‘Fine assortment of cheeses’, so they come by their bravado honestly.  Light crust, just enough heft.  It’s healthy, it’s tasty, it’s two bucks.  Nice little treat, makes you feel good about yourself.  If you need to carb-load, then I would suggest you walk up a few blocks to Chinatown, where the breakfast of champions is the green tea waffle.  You can get it stuffed with anything from whipped cream to peanut butter.  Although it is usually eaten for dessert, by the time I finish my Banh Mi from Paris Sandwich on Mott St., I’ve had enough, so it always gets eaten for breakfast the next day.  It’s good to plan ahead.

But if you’re truly feeling like you need to shovel some nasty shit down your rusty gullet in the A.M., you can always try this wonderful fall holiday recipe from Cooking with Dunkin’ [pumpkin gravy breakfast made from Dunkin' Donuts muffins and coffee]  It is so grotesque I feel uncontrollably drawn to it. 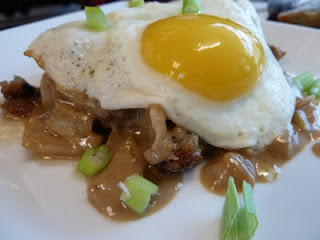